Hello all.
2017 is the Sogetsu school's 90th Anniversary, so, prior to the Ikebana International World Convention, a number of celebratory events were organised by Sogetsu headquarters. This was very convenient, as many of us, who would be attending the Convention, chose, also, to attend some or all of the events.

I arrived in Tokyo quite early on the 5th April and, after leaving my luggage at the reception of my hotel as it was too early to check in, I went for a walk and, without planning it, I ended up at Sogetsu headquarters. The scene below is what greeted me.


This was outside the headquarters building and, as impressive as that was, I was not prepared for what greeted me inside the Sogetsu Plaza. It was mind blowing!

Rectangular pieces of stainless steel (close-up below) in their thousands lined the walls and floors of the 'rock garden'. Ikebana arrangements, from miniatures to large installations in antique rickshaws, were placed all around the plaza. The effect was mesmerizing. 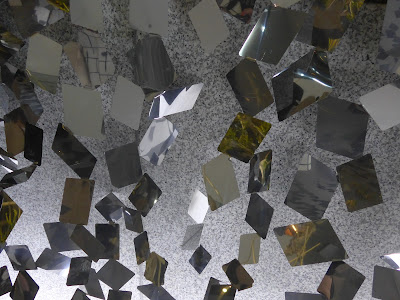 I took the photograph, below, from the second story, where I stood for some time absorbing the view. I felt I was in 'fairyland'. 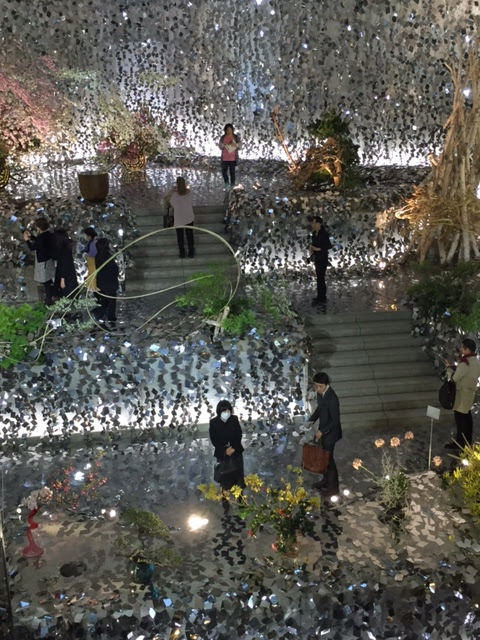 The one draw-back was the inability to get clear photographs of the arrangements because of the reflective nature of the stainless steel. I will, however include some of them, in the order that I took them, from the entry at ground level to the top level. 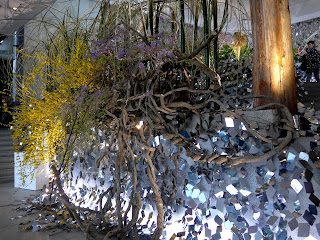 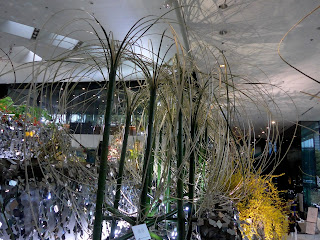 This was also an opportunity to run some training sessions for the new Book Five - Technique and Creation.

I attended one workshop run by Eikou Sumura sensei on the theme 'Composition Expressing a Movement', where we had to select a verb that described some movement and depict that in our arrangement. Below is my arrangement and my verb was 'Hiding'

I also attended an all day training session with a Special lecture by Iemoto as well as other videoed material. There was also a demonstration by Suisen Takagi sensei of ten arrangements of different themes from the new book. Unfortunately I am not able to post the pictures that I took because it was stated very clearly on the printed material that we were not to do so.

So, where to begin? Firstly I have to express my gratitude to the organizers and volunteers, who have worked tirelessly for the smooth running of the Convention. It must have been a logistical nightmare. We are often guilty of noticing the little things that may not go according to plan but we simply take for granted all the things that go well, and forget the planning, thought and effort that was exerted by the organizers.

My arrival in Okinawa was anything but smooth but I won't bore you with my wowes, suffice it to say that I staggered into my hotel room at about 10.30pm lugging heavy suitcases and lamenting the absence of my husband.

For the 5 days of the convention, I woke up at 6.00, then to breakfast at 7.00 and to the shuttle bus at 8.10. Fortunately, there were a number of Australian colleagues with whom I kept company.

On the first day we set up our exhibition arrangements. Mine created some discussion because some people found it impressive and others wanted to know how I managed to create the shape. Also, they wanted to know what the material was that I used. I always thought of it as a 'Palm spathe'. However, I was told it is a leaf, not a spathe. So, with the help of Google I discovered that I was wrong and, in fact, what I used was the leaf. 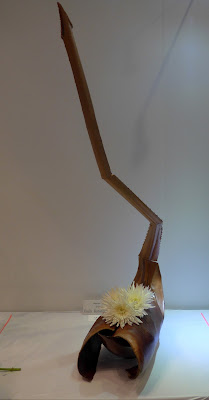 I have to apologise in advance that I will only post photographs of the arrangements made by people I know, who gave me permission to do so. As is always the case, in the exhibition there were those arrangements that appealed to me and those that did not. I'll share one little anecdote with you - a number of us were walking through the various rooms with exhibits when we came across an arrangement we liked and said so. Its owner happened to be standing near and overheard. She smiled shyly and admitted that the arrangement was hers. We congratulated her on her work and introduced ourselves. Imagine my delight when she told me she already knew me and that she has been following my blog for some time. Her name is Larisa Sarycheva and she is from Moscow.
Below are some of the arrangements at the exhibition:


And now for the demonstration. Things started out with a set-back when Robyn Unglik, who was to be my assistant, had to cancel her trip due to a family illness. But I was lucky that Eugenia Chudacek agreed to step in and she took the job very seriously. I arrived in Okinawa too late to attend a briefing for the demonstrators so Eugenia attended for me and took detailed notes. Also, I'd been ill in Tokyo prior to going to Okinawa, which left me somewhat scatterbrained. Whereas I'm normally well organised, I found myself forgetting things and making mistakes. This is where Eugenia came in and kept me to the schedule. I'm so grateful to her because I don't know how I would have managed without her.

I have a great deal of experience in demonstrating so I don't suffer nerves beforehand. However, knowing the size of my audience and the fact that at least two Sogetsu master instructors would be  there, did produce some butterflies. Then, to make matters worse, it was whispered to me that there was to be a surprise - three Imperial  princesses would also be attending - H.I.H. Princess Hitachi, H.I.H. Princess Takamado and Princess Ayako.

I'm happy (and relieved) to say that everything went like clockwork. Judging by the applause, the audience seemed to like my work.

There were two demonstrators on stage at the same time. Our first arrangement was made using the common material that was provided - bird's nest fern. Then we each did a free style. When we finished we were asked to line up in front of the stage to be greeted by their Imperial Highnesses. It was quite an unexpected honour to shake hands with Royalty.

Once their Imperial  Highnesses left the auditorium, I was 'mobbed'. Seriously, there were so many people talking to me at once that I was bewildered. Among them was a reporter from an Okinawan newspaper whose first question to me was how old was I! He then wanted to know what I liked best in Okinawa. Sadly I could not answer having seen only my hotel and the convention centre.

During the rest of the convention I was constantly stopped by people telling me how much they enjoyed my demonstration and how confident I looked on stage. Little did they know that when I was doing some fine wiring, I whispered to Eugenia that my hands weren't working properly.

The most significant affirmation, however, came from Ken Katayama sensei and Kosa Nishiyama sensei, both master instructors of the Sogetsu school, who expressed approval of my demonstration.

Another highlight for me was meeting people who have been following my blog, as well as making new acquaintances with people from around the world. 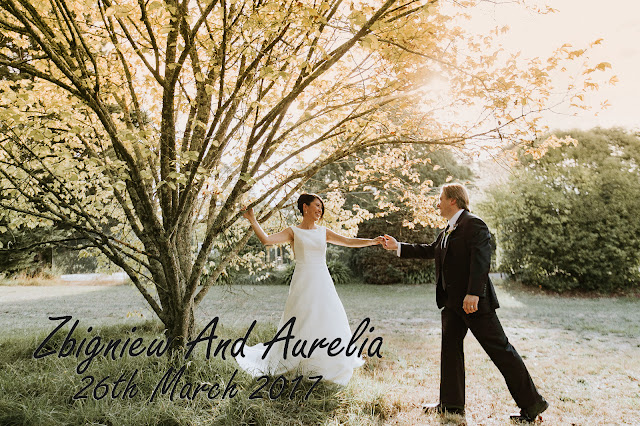 OUR AURELIA GOT MARRIED!

Last Sunday was a very special day. It was the culmination of countless hours of planning, organizing, weather forecast watching and a little bit of anxiety. But, by and large, everything went like clockwork.

And I have to say our girl did us proud. She looked absolutely enchanting. And her groom wasn't bad either. In fact, they make the perfect couple. 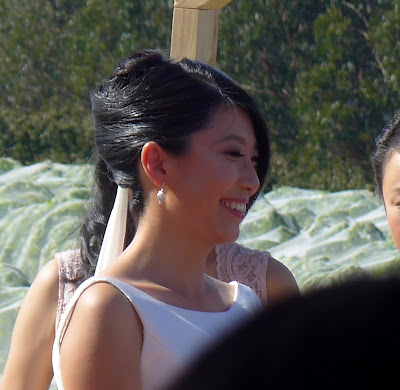 The ceremony was held outdoors at a winery with 360 degree views of the surrounding hills. The weather was perfect - warm and sunny with just enough clouds in the sky to make the view even more beautiful. 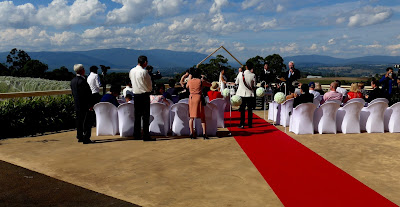 The bride walked down the red carpet on the arm of her proud father and linked hands with the groom, Zbys. A celebrant conducted the ceremony and vows were exchanged. The bride and groom wrote their own vows, which were so moving that, to my surprise, I became quite emotional. 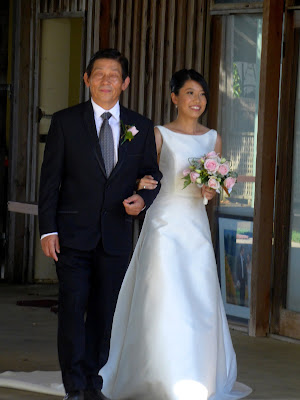 As you may have guessed, Aurelia is one of my students and has been for a number of years. She is the youngest in the class and the rest of us have taken a rather motherly attitude towards her, which she tolerates with good grace. She is a young woman with the sweetest disposition and we are all quite fond of her.

When Aurelia announced that she would be getting married, we discussed what would make an appropriate wedding gift and we settled on making the flower arrangements for the reception. As an Ikebanist herself, Aurelia was very pleased with the idea of different ikebana arrangements on the tables. The bridal and bride's maids' bouquets were expertly made by Glenda Nielsen and suited the girls perfectly. 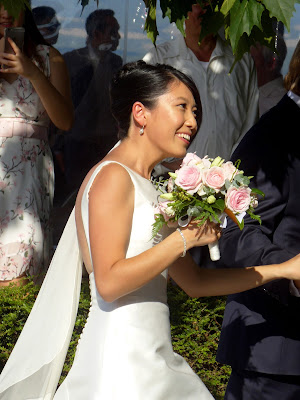 On the day, we all met at my place and finalized our arrangements, We then loaded them and us into two cars (that took some doing!), drove 45 minutes to the winery and set up without a hitch. Having allowed plenty of time for any possible problems, we were early for the 3.30 ceremony so we took ourselves to lunch.

Back at the winery, we were just in time to see our girl walk down red carpet. We watched as the celebrant pronounced them husband and wife, we congratulated them, took some photos, did a final check of the arrangements in the reception room and left. Lucy and I returned the next morning to collect the arrangements. 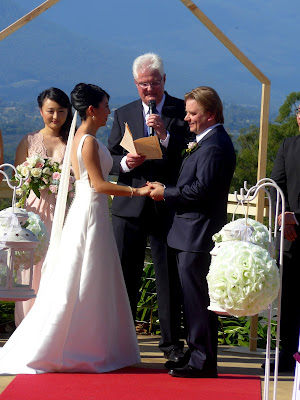 It was a relatively small wedding - about 80 guests (by Greek standard, it was tiny), requiring only 11 arrangements. As I mentioned before, they were completely different, showcasing each person's style and creating interest in their diversity.

The following three arrangements were made by Vicky Kalokathis

The next two are by Lucy Papas


I did the next three

We were very happy to have a small part in Aurelia's wedding and we wish her and Zbys a lifetime of happiness.


Bye for now and I hope to see some of you in Okinawa.
Emily