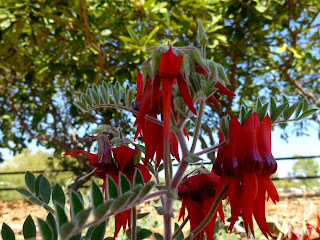 Hello all,
I've just returned from a much needed short holiday in Broome. The weather was perfect, the sunsets breathtaking and the beach unsurpassed. The tropical vegetation at the resort was a delight for the eyes of a southern gardener like me and I took quite a few photographs but I will only share the one above - Sturts Desert Pea (Swainsona formosa). It's the first time I've seen one actually growing and was delighted when I came across it.

A few weeks ago for class we did a workshop on 'Relief'. This is something we had not done before but which everyone seemed to enjoy. Some of us had so many ideas that it was difficult to settle on one, so,we didn't.

Vicky experimented with plaster and created the following three pieces. 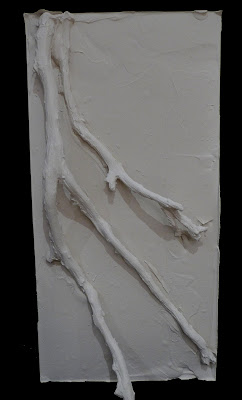 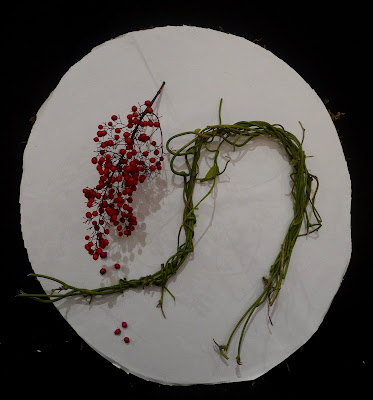 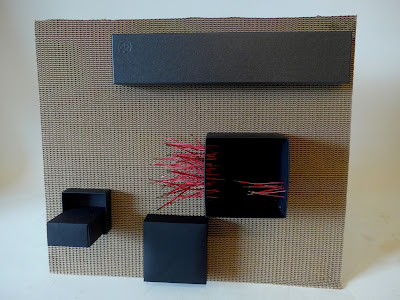 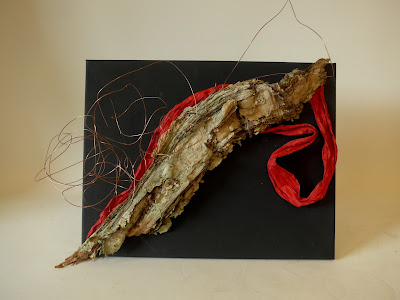 Robyn used a lichen-covered branch with metal and string. You would have seen this piece in my previous post as part of the Sogetsu exhibition. 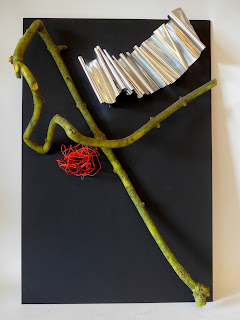 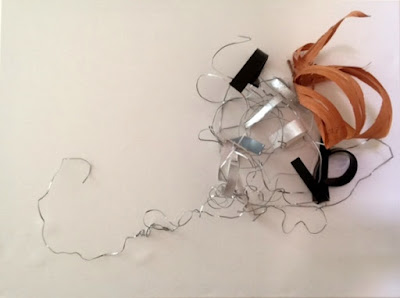 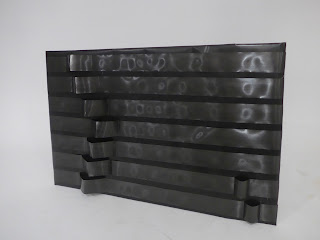 And for our workshop she used pine needles for her relief, which I felt was was such a good idea that I encouraged her to make a larger one for the Sogetsu exhibition. 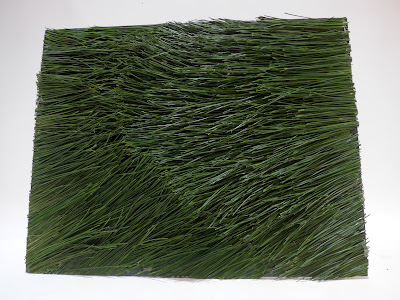 As for me, for my first attempt, I used weeping willow stems with this  "fork" form together with nandina berries. 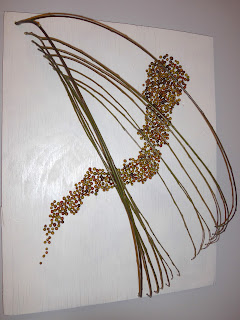 For my second attempt, I wanted to use my bamboo again in a completely different way. 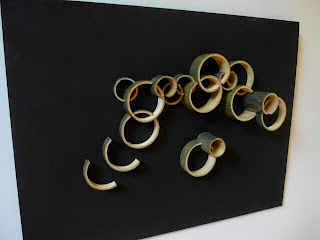 And for this last one, I used cardboard that I had to split apart to reveal the corrugation pattern inside, not an easy task! 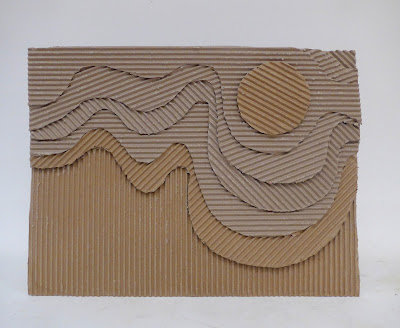 One of the great pleasures of teaching Ikebana is seeing the different styles and interpretations of themes that each students brings to the class. I feel that the variety of the above work proves my point.

Until next time,
Emily

For those of you who are not aware, the Sogetsu School of Ikebana Victorian Branch is currently having an exhibition until 8th August at Melbourne Style Gallery, 155 Clarendon Street, South Melbourne between the hours 10.00am and 4.00pm.

I have included here some photographs. Please go to our website to see all the arrangements.

Last week, I was privileged to be invited to demonstrate for the annual luncheon of the Sale Floral Art Group. Lucy volunteered to come along to assist and I'm so glad she did because I could not have done it without her. She and I have been working together for so long that she can anticipate my needs, thus making her the perfect assistant. I had prepared 11 arrangements, which I packed very carefully to make them fit into my little Honda Jazz, leaving no room for visibility through the rear vision mirror.

Lucy took the wheel for the 2.5 hours' drive there (whilst I ate breakfast) and I drove back. We were treated to a delicious lunch at The Criterion Hotel along with the 120 guests. And for dessert there were plates of a variety of the most delectable 'slices' made by members of the group. They say that confession is good for the soul, so I'm confessing that I ate a lot more that I should have.

As for the demonstration itself, I felt it went very well judging by the feedback we received. There were people who told us they had never seen anything like it before and one lady who said she was 'blown away'. I had been dealing with Heather Harrington who, together with all the other members of the group, went out of her way to make us feel welcome and to provide anything we needed. We were really made to feel special.

The theme  for the day was 'Black and White'. The room was decorated appropriately and everyone, who attended made the effort to dress accordingly. A workshop was held the day before to create the smart, black and white arrangements on the tables. 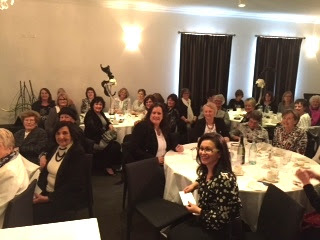 My beautiful assistant, Lucy at the front of this photo
of the audience The arrangement below is one I donated to the group for auction, which created a little bidding war between a lady at my table and the manager of the hotel. He bought it, finally, for $90.00 and proudly displayed it at the bar of the hotel.


As I mentioned before, we were made to feel very special by the organizers and guests alike and in the end I was presented with this beautiful Japanese container. Today I went to class at Elizabeth's and, of course, I had to use it. The theme was a 'Green Arrangement' and I used New Zealand flax, calla lily buds and leaves. 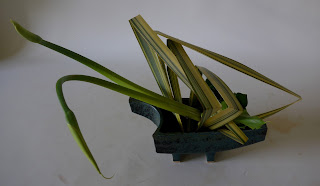 Until next time,
Emily