Finding time to write this post has been difficult at this crazy time of year but I wanted the opportunity to wish you  all a very happy and safe festive season, in whichever way you're celebrating it.

As for us, our plans were right on track to have nearly fifty people for a buffet lunch featuring a lamb on the spit. However, the total fire ban, which was announced for tomorrow has ruined our plans and we are scrambling around for a plan 'b'. I'm sure we will manage and that no one will go home hungry but this extreme heat will make things much harder. So, I'm writing this post after midnight hoping to publish before Christmas Day. 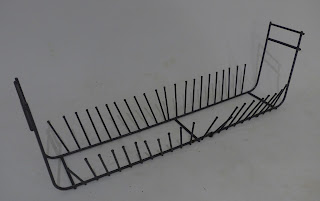 Some time ago I was about to throw out this unremarkable object, a rack from an old dishwasher, when Lucy came up with an idea for its use. She suggested we each take turns making an arrangement using the rack as unconventional material. So I put it to the girls, some of whom managed to make one.

At our last Sogetsu workshop, which was conducted by Lara Telford, we were to do an arrangement along the style of one of the Iemotos. I chose Sofu Teshigahara because I particularly like the way he used 'mass' in  his arrangements. 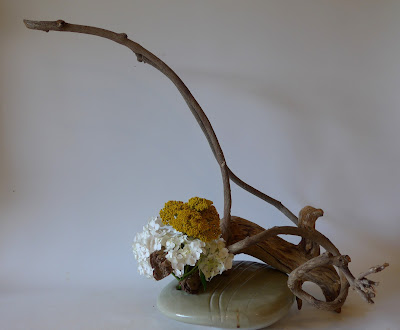 I leave you with this arrangement that looks like it's about to take flight. The flowers of this strelitzia reginae grow as tall as two metres and the heads are so large and heavy that they bend down creating these interesting shapes. 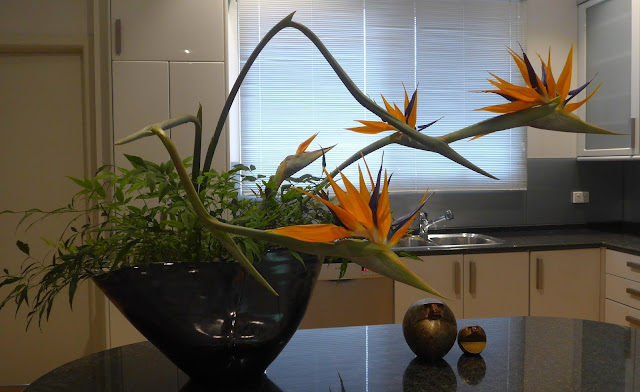 My apologies for my lengthy absence from this blog and, I confess, the reason I'm writing now is because we have a power failure and I can't do the things I had planned for tonight. I will spare you the details of my hectic life with one notable exception - the Baptism of my little granddaughter, Althea, which took place yesterday.

I was heavily involved in the preparations of the baptism with the cake, the flowers and making dresses for the girls as well as my own outfit.

So now, back to ikebana.

Two lessons ago I set the theme 'glass containers' and below are three examples I made. It was just coincidence that I have used two containers in each one.

For the last two classes with Elizabeth, we were to do an arrangement 'with leaves and roses' and an arrangement 'in an ordinary household item', respectively. Below are my two pieces.

And for my last lesson of the year we all did 'a celebratory arrangement'. We had quite a lot of fun with this and I'm including most of the arrangements made.


The next three arrangements are by Lucy Papas, who is quite prolific. 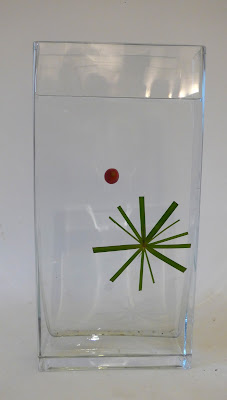 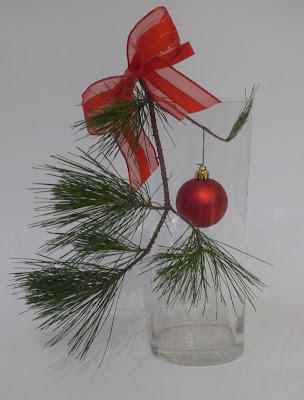 And the next five arrangements are by me. OK, so I went a little overboard! 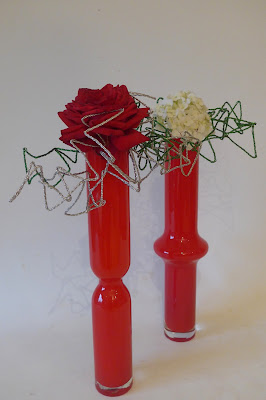 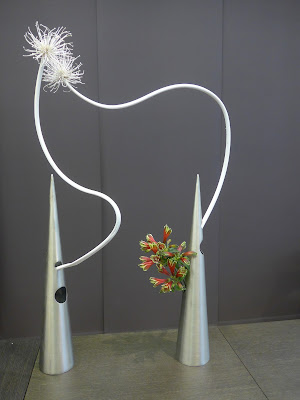 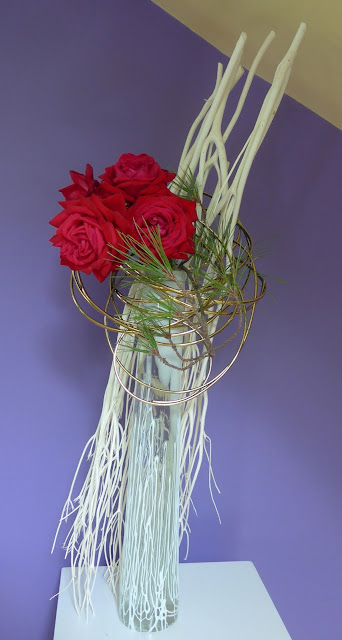 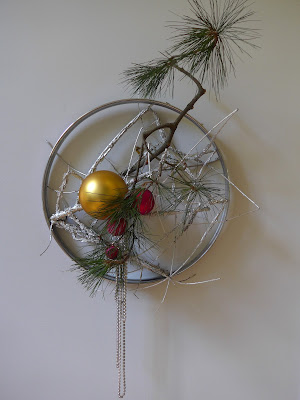 I would like to leave you with a piece I call 'the embarrassment of riches', in which I used three of my giant strelitzia nicolai flowers and monstera leaves. 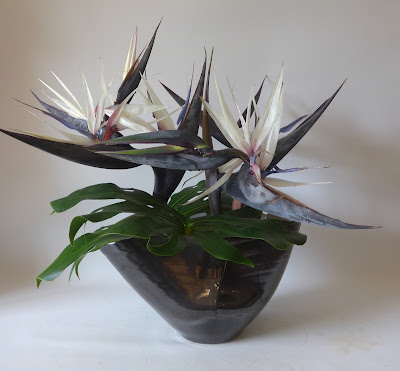 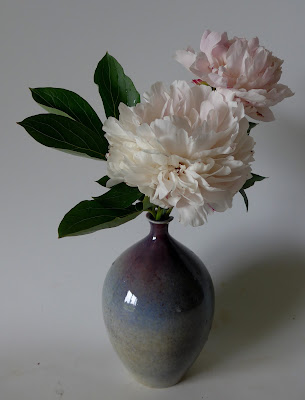 I have two herbaceous peonies, that have been the source of great frustration for many years by their stubborn refusal to flower. I have tried everything, including freezing water into big blocks of ice and placing them on the ground above the plants to simulate frost. But to no avail. This year, to my great delight, each plant has produced four buds, thus earning a place in my blog. I'm guessing that the unusually cold winter may be the reason for them flowering but I can't be sure. I did not want to make an ikebana arrangement with them, firstly, because the stems are very short and, secondly, because the flowers make such a statement that they don't need anything else.

At the October meeting of Ikebana International Mr Barrie Gallacher, a volunteer from the Australian Native Association spoke to us about Australian natives and more particularly about the Royal Botanic Gardens in Cranbourne. I had not visited those gardens before and was inspired to do so after Mr Gallacher' talk. I highly recommend to anyone, who is able to visit the gardens to do so. I learnt a great deal, most especially about how ignorant I have been about Australian natives. One of the things I learnt is that the plant I have been calling gyamea lily is actually doryanthes palmeri, also knows as giant spear lily. It's the slightly different, doryanthes excelsa that is known as Gyamea lily.

I had been asked to do a demonstration for the group using Australian natives. I have to confess that I don't have many natives in my garden (a situation I'm already rectifying). So the task was made more challenging, firstly, in finding appropriate materials and, secondly, because I prefer modern styles of ikebana and Australian natives tend to lend themselves more to naturalistic work. But I felt I should rise to the challenge. I used Doryanthes palmeri leaves, red calistemon flowers and bought some spear grass. The resulting arrangement is below. 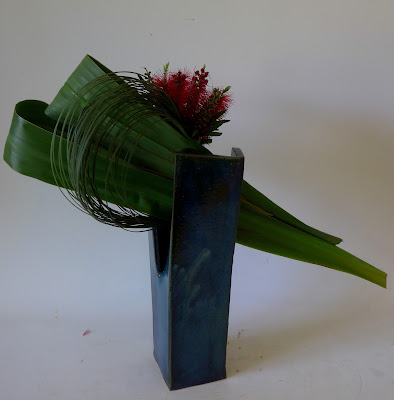 The theme for one of our recent lessons was 'In a suiban without kenzan', for which I prepared the two examples below.

On the same day we also had students doing and arrangement 'Emphasizing curved lines' and my example for that follows.

Two weeks later, our theme was 'Seasonal Material', in this case 'Spring' and I instructed the class to make it a 'maze-zashi'(a mixture of a variety of materials and colours). Again my examples are below. 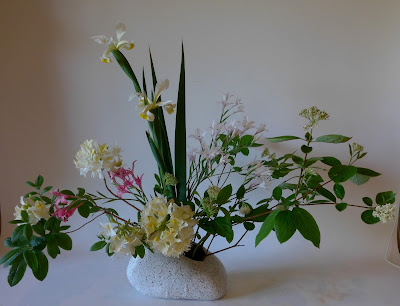 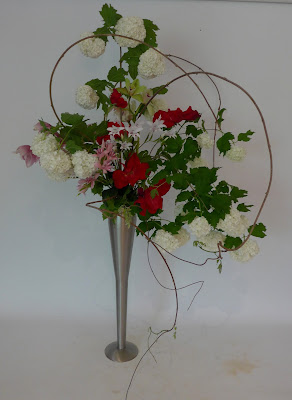 By coincidence, my teacher, Elizabeth had set the same theme for her class and I tried doing something a little different this time. 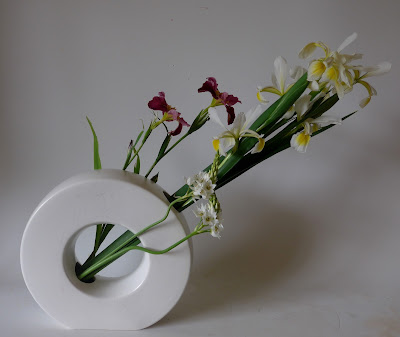 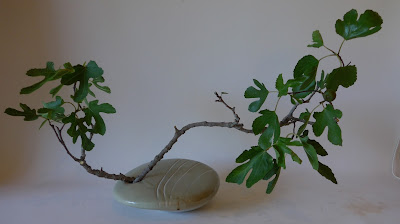 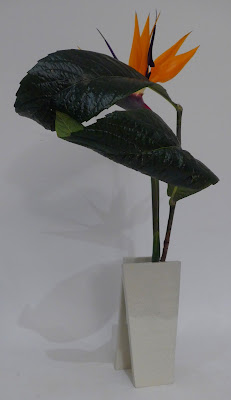 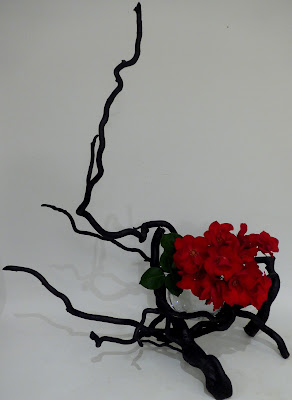 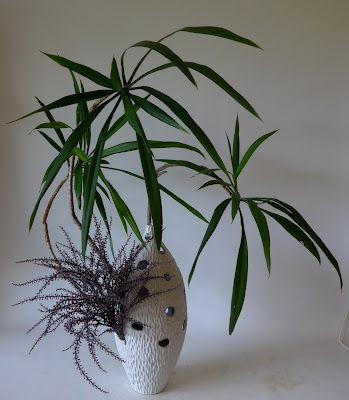 Hello all,
There has been a lot of ikebana related activity lately and I'm almost ikebana'd out - almost but not quite. In preparation for tomorrow's classes, after I had prepared 8 arrangements, I was cleaning up the buckets that held old and decaying material and, as I went to throw it out, I found a piece of strelitzia nicolai leaf that was changing colour beautifully and I could not discard it. It inspired me and I found the energy to make just one more arrangement. The problem was, I had no more surface area left on which to display it. Anyway, here it is- 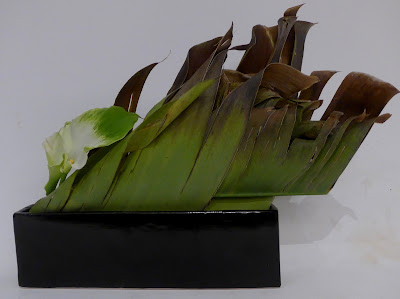 I recently ran a workshop for our group where the participants were asked to create an arrangement referencing a particular work of art. I asked them to think carefully and express their own feelings or impressions about the art piece, which were purely personal. It was fascinating to see the different interpretations of the exercise. I am including the three examples I prepared for the workshop but I recommend that you visit the Sogetsu School of Ikebana, Victorian Branch to see all the work by the participants.

For my examples I wanted to use a piece of art that I could transport to the workshop, so I chose these brass Japanese Macaque monkeys, which were an impulse buy when I was in Japan. In the arrangement below I wanted to capture the feeling of the protectiveness of the adult monkey towards the child, so I used this curved pussy willow. It also reminded me of the frost on the fur of the monkeys when they bask in the hot springs during winter. 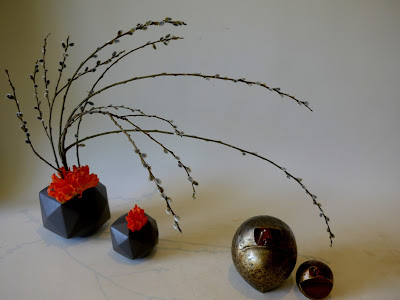 This next painting is called 'The Last Stand of Benkei' by a manga artist, Hiromitsu Tekada. The most striking feature of this work is the violence, which I tried to represent by the use of the sharp bulrushes and New Zealand flax. 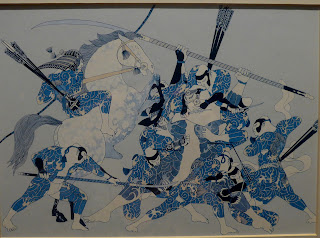 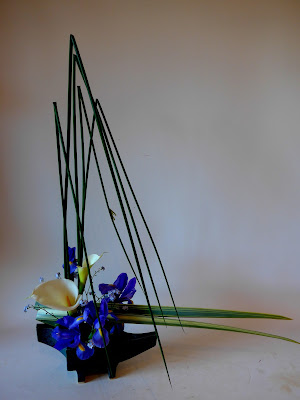 I have long admired Gustav Klimt's work but I recently saw the movie called 'Woman in Gold' and was quite inspired by the story. So I decided to reference his painting of Adele Bloch-Bauer for my next arrangement. I think it speaks for itself. 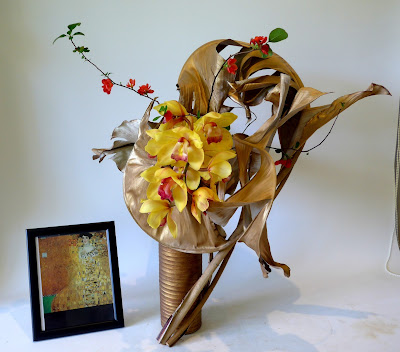 My very large Streletzia nicolai was a little overgrown and in need of cutting back. This was an opportunity not to be missed, so I suggested to my students that we all workshop the huge leaves that I cut away. For that lesson we also had the pleasure of the company of two guest ikebanists from Canada, who were visiting here and wanted to have a lesson with me. Eleanor Heath and Leonora Duffield seemed to enjoy using the leaves that were quite new to them. Both ladies were generally impressed by the variety of material with which we are blessed.

The following pieces are my examples -
And the students' work -

I leave you with this arrangement emphasizing straight lines.
Bye for now,
Emily 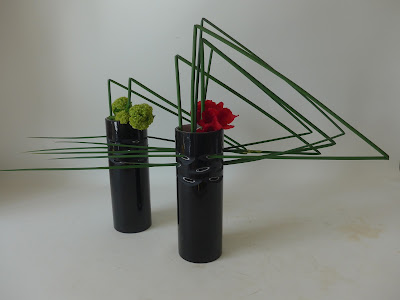